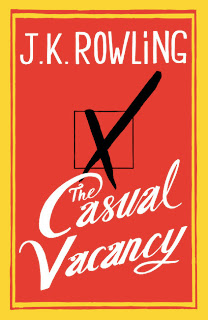 The front cover of JK Rowling's upcoming book has been released. Cover design by Mario J. Pulice, illustration and hand lettering by Joel Holland. Published by Little, Brown Book Group, The Casual Vacancy will be released on the 27th September.

Twitter went into meltdown with the release of the cover. It can only be good news for the upcoming release!

Nice of them to let one of JK Rowling's kids design her new cover on MS Paint.

That's how the world works now doesn't it? RT @Tim_Coronel: so, if all of Twitter hates the new #JLRowling cover, will it be changed?

What do you think of the front cover. Love it, hate it or so so?

Amy Hatvany was born in Seattle, WA and is the youngest of three children. She graduated from Western Washington University in 1994 with a degree in Sociology only to discover...

Thrilling Reads To Keep You On the Edge Of Your Seat

From jingle bells to wedding bells!

Lying in Wait by Liz Nugent

Sophia Whitfield in conversation with our featured authors

Film Review: The Age of Adaline

Quote of the Day from Mitch Albom